The Radio Disclosure Radio Show is focused on a wide area of subjects that range from UFO's Ghosts, The Paranormal, Hauntings, government coverups, medicine, business, industry and fraud. From the latest reported government cover up, alien abductions, medical problems, social problems, and the latest in the world of phenomenon. Radio Disclosure uncovers the facts and asks the questions that conventional mainstream media refuses to disclose. Radio Disclosure is hosted by Ted Randall and Matt Aaron and airs on International Shortwave and domestic radio stations.

Ryan Fusco from Pittsburgh, Pennsylvania join us on Radio Disclosure. He has been a UFO researcher sense the age of 16.

Ryan Fusco from Pittsburgh, Pennsylvania join us on Radio Disclosure. At the age of eight he and his family, while driving down the highway with his father and brother, they saw something UFO in the sky. It got so close it dropping something on the car. Then some point later, he and his dad saw another UFO. Making him become a ufo researcher at the age of 16.

You can see Rayan's Images. 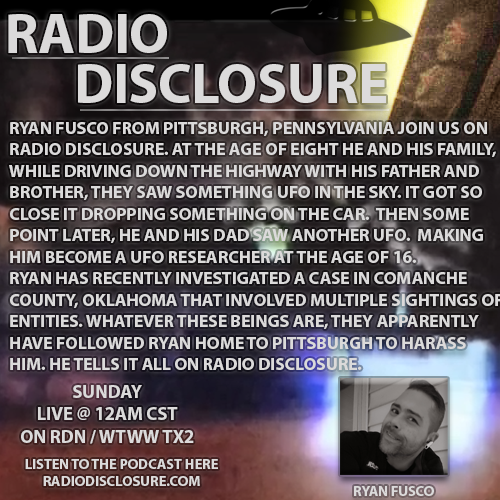